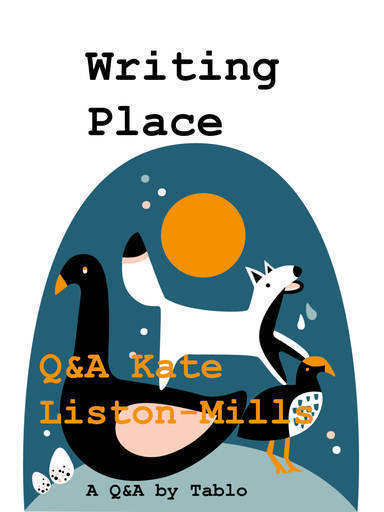 Emerging author Kate Liston-Mills talks about the joys and the challenges of fictionalising her hometown in regional New South Wales in her short story collection, The Waterfowl Are Drunk!

'Death and life are so inextricably linked I think I’ll forever be trying to find out how one can help you understand the other.'

Kate Liston-Mills’ The Waterfowl Are Drunk! is a series of funny and heart-warming short stories set in the author’s hometown, Pambula, on the far south coast of New South Wales.

This Q&A with Kate Liston-Mills is an updated version of a discussion which took place on Spineless Wonders’ online bookclub. The questions and comments were from a range of writers and readers – specific names have not been included here.

Where did the idea of writing a short story collection about the town you live in first originate?

About eight years ago I bought my Nana’s 1860 heritage cottage in Pambula. This is where I now live with my family. Incidentally this is the setting for most of the stories in The Waterfowl Are Drunk! I wrote this collection almost as a pastoral as I was living in Wollongong at the time and I was feeling nostalgic for home after the death of my aunty. Pastoral in the sense that I was city dwelling and dreaming of a simpler, slower place to grieve and home (Pambula) had felt like Arcadia to me at the time. The first story in the collection, ‘Bound’, came about because I was exploring what the essence of Pambula was and why so many people move back to a place that holds so many (often negative) memories...

Has the writing been purgative or cathartic then?

A woman in the creative writing class I was in at Wollongong Uni asked a teacher whether you could 'write "through" things'... that question struck me... i think it was a bit of a purge but I don't think it was healing... not really. But I'm glad I have this record, be it somewhat fictionalised, of my life during that time. Death and life are so inextricably linked I think I’ll forever be trying to find out how one can help you understand the other.

What was it like digging into all that family history as you were doing it? Before you showed any of your family the final book/stories?

Some of my family members have found the book hard/nice to read... I guess even though I really tried to fictionalise it, so much truth came through. At first the family seemed hesitant, almost irritated. Now, they are collecting and offering stories to me and asking me to write a second one!

Do you find you need to get some distance in terms of time, and emotional involvement, in order to write about real people and events from your life?

My poetry teacher Alan Wearne always said after reading one of my poems, “Kate, you need to come back to this in a few years.” I think you do need to wait a period of time after the event before publishing anything. Distance and time both help you in the editing process. You know by then, the pearls and the scraps. I also think if you’re too close to something the writing can feel too raw. I wrote this collection pretty soon after my aunty passed away but my editor helped me avoid too much sentimentality.

It seems that this collection could have been written as either fiction or non-fiction. Do you find being able to have the freedom to make stuff up and not stick to something recognisable, easier to get at emotional truth? Or was it more a question of logistics?

I've always thought of fiction as being truth and facts as being dry and often wrong...  When I write anything I always ask myself what is the truth of this story - now how do I tell the truth - how do I really expose what the truth here was?  I think truth is hardly represented in history books ... truth is the emotions, the scars, the laughter, the friendships you're left with after all the facts have happened... facts are just cement. Often pretty grey and stiff and hard. I think non-fiction is a very weird idea because there's always a writer and a writer is always bound by perception. I put more trust in fiction. If I ever write a memoir, I’d liked it to be shelved with fiction. Plus, there’s a freedom with fiction. That wild feeling when I sit at the computer. I live for that.

The Waterfowl are Drunk! has some great contrasts. Some of it is hilarious, but the overall story has a more dramatic approach - is that important to you or just part of your version of realism?

I've always wanted to be an actress. I don't have the figure for it though... nor the address... But I love drama. I wanted to make it even more dramatic but I tried to hold back because the stories needed to breathe a bit due to the brevity of the collection.

I love Baz Luhrmann and his fantastic sets. Perhaps they are part of his version of reality. And perhaps that is true for me too. I’ve always wished the world was bigger, brighter, louder, busier, faster.

In that first story, ‘Bound’,  the death and the drama, the close family connections in the natural world puts the reader in the right mood for the stories about the same things in the human world. Is this deliberate?

‘Bound’ was actually the second last one I wrote in the collection and I struggled a little with it... I felt so emotional connected to those birds - probably even closer than with the human characters... Often, I like animals better than I like humans. Bound was very deliberate. I wanted to set the scene and ground the reader. It felt like a good place to start.

The character, Georgia from ‘I don’t even like Scotch Finger Biscuits’ was well drawn, such a funny take on a teenager and her nan, Hazel was so patient with her. Did you find this portrayal of a younger teenager difficult or easy to write?

Please don’t judge me but I found Georgia so easy to write. Like Georgia, I used to surf a lot but now not as much. Once I started writing her, the words just started flowing. It was like I was in high school all over again, like that pain-in-the-butt teenager was still in me, kicking and fighting to get out. I actually really enjoy teenagers. They often haven’t learnt to pretend they’re happy and fine, or to filter their thoughts. It’s a very raw time.

And which characters were the hardest to write?

I started off really idealistically thinking I could write a full collection from the perspective of Lottie... However, I quickly realised that language for Lottie was a problem. Her thoughts would have been limited by language barriers and then my prose felt really stilted and forced... So after many trials I realised it wasn't going to work... that I'd have to show Lottie's perspective in other ways. I found that probably the hardest - trying to work out what she was thinking and feeling all the way along. But then when I relaxed a little and let it flow more I realised her intentions/thoughts/feeling were always pure. Never contrived or mean... just love and laughs and tea...

Are many of your characters based on real life? How about that weird stranger, the woman who came to stay for a few days and then left just as suddenly. Fact or fiction?

Pambula used to be the land of hospitality and my nan's house (my house) was in the middle of town and she'd always have at least 3 visitors at any one time... there was always cake and tea going round - always! That character was actually based on a woman with dementia who went missing from the Pambula nursing home and ended up at my nan's... nana was too proud to admit (she prided herself on her memory) that she didn't recognise the woman so invited her to stay... she stayed three days and four nights until the police turned up!

Was Lottie, the woman with Down Syndrome, based on a real person too?

Lottie was based on a real person. Very much so. Maybe the facts are a little different but the essence is there...  Lottie was based on my aunty who had Down syndrome. She was a very wonderful and constant part of my life until a few years ago.

How did you strike on the title for the collection. Kate? It's a cracker ...

Thank you! I thought : What is Pamby known for? It has two pubs... and wetlands... The birds represent the wetlands and the drunk represents the smallness of the town and the fact that there are two huge, heritage pubs there...

Are there overarching themes to the collection?

Disability was where my collection started... the labelling of a person with a disability. And then following that label through a life and seeing how the label not the person determines how they are perceived... in a nut shell I guess perception, impression and disability are major themes in this.

The second major theme was regional Australia and small town living - the irritations and the moments of gold.

And there is the generational aspect, with Ed and Hazel, their three children and then their children. Growing, up, growing old, loving and losing.

Sensory detail ... From brand names to bird details to all things in between. You are so good at it. How do you gather it? Are you a journal keeper? What process works for you?

I always remember smells, images, feelings, and sounds and very rarely remember facts. I like to capture small moments in my head - in my bag - in my journals - in whatever I can... I love the very small things. I think collecting details is the constant work of a writer. Without detail the narrative floats up in the ether somewhere. Detail places the reader and gives a story life. I can still remember clear as anything the smell of my very first pre-school lunch box. It was a pink My little Pony one and it smelt like honeysuckle and every time I walk up my parent's dirt road there's honeysuckle on one of the neighbour's gates and I stop to smell it... and I feel joyous... like a four year old just for a second.

I did enjoy reliving this particular discussion. I think it's safe to say I got a whole new perspective on your book through the Q&A. I like to think that writing should stand on its own merits and yet there's something delightful about knowing the background of a work. In this case, the background was richer than I had imagined.

Kate Liston-Mills lives in Pambula and works as a journalist, writer, poet and teacher. Her works have been published in the Sydney Morning Herald, Daily Telegraph, Writer's Edit, Prowlings, Tertangala, TIDE and the South Coast Writers Centre. Her short fiction collection, The Waterfowl Are Drunk! was published in 2016 by Spineless Wonders.

Tablo is a new generation of book publishing company. We're the most author-friendly publishing company in the world, where new and successful authors can create their books, publish globally, and build their careers. If you want to join our team, read this book :)

Here's everything you need to know about Tablo, our product, and even some of our plans.

Non-Fiction
Looking for an Editor or Cover Designer?Tablo

Looking for an Editor or Cover Designer?

Here are some suggestions from Tablo if you need an editor or cover designer. We hope it's useful!